Details of the trip

‘Doranahalli’ is a village where the famous St. Anthony’s Shrine is located with all majesty. After the first church built by the farmer, another Church was built in the middle of 19th century but in the later days it became the presbytery.

Shettihalli Church is located 2 km from Shettihalli, Hassan, in Karnataka. Built in the 1860s by the French missionaries in India, the church is a magnificent structure of Gothic Architecture. 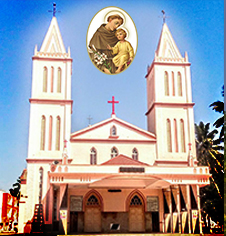 Two km from Srirangapatna and to the east of this historic place is a quiet town called Ganjam, which takes its name from the Persian ‘Ganj-i-am’ meaning ‘granary of the world’. Originally a prosperous ‘shahar’ (city) during the reign of Hyder Al...

Originally a prosperous ‘shahar’ (city) during the reign of Hyder Ali and Tipu Sultan, Ganjam is now,  however, better known for its most visited Gumbuz, the famous Nimishamba temple and for its  good old church which is an important landmark of this historic town. The Immaculate Conception Church (Abbe Dubois Church) was established at Ganjam 200 years ago by a French missionary, Jean Antoine Dubois, who is said to have been living here, and doing community service for about 30 years.

As you enter the peaceful Abbe Dubois church, an eye-catching (about 15-ft high) bell tower greets you at the entrance of the holy church, dedicated to Mother Mary, also worshipped as ‘Amoldbhava Mathe’. Adjacent to the bell tower is a small memorial...

‘Doranahalli’ is a village where the famous St. Anthony’s Shrine is located with all majesty. After the first church built by the farmer, another Church was built in the middle of 19th century but in the later days it became the presbytery. One other Church was built in 1920 by a generous man called T. Dharmaraj Chetty (second son of Sir T. R. A. Thumboo Chetty). Recently when it developed cracks it was demolished and rebuilt by retaining the original facade.

The structure behind this is the present church. Consecrated on 13 June 1969 this church in the shape of a Tau (English alphabet T) cross and with an ample space, can accommodate a thousand people. At the front nave, above the corridor there is a big Cross and adjoining this is a pair of tall towers having cross at their tips. The construction of this memorable edifice was commenced in 1964 by Mon Signor I.H.LOBO and completed by Rev. R. FELIX THAVRO. This church also houses a small piece of St. Anthony’s relic brought from Rome.

It was in 1977 one Mr. Chandappa Shetty of Mangalore built a structure on the place where the farmer had built a temple earlier.The main church offers special prayer services on Tuesdays and annual feast is celebrated on 13 June of every year.

Shetty Halli Church is Popularly Known as “ Submerged Church “ and “ The Floating Church .Its interesting church and abonded Church called the Rosary Church in a village called Shettyhalli  in Hassan district of Karnataka state

About the Shettihalli Rosary Church

It was Build by the French missionaries in India  during 1860s. This church is a gorgeous example of Gothic-style architecture. The area around the church got deserted after the construction of the Hemavati Dam and a reservoir (Gorur Dam) in the year 1960; later, the church too was forgotten.

Back to Bangalore . End of  Dornahalli and Shetty Halli Church Tour

1. The above tariff includes Transportation, Accommodation

1. Children above the age of 5 years will be charged full fare. No seats will be given to children below 5 years.
2. The corporation shall neither be held responsible nor will the amount be refunded in case you miss the bus.
3.  No postponement of journey will be made within 24 hours. Once the journey is postponed cancellation will not be considered.
4. Tariff subject to change without notice.